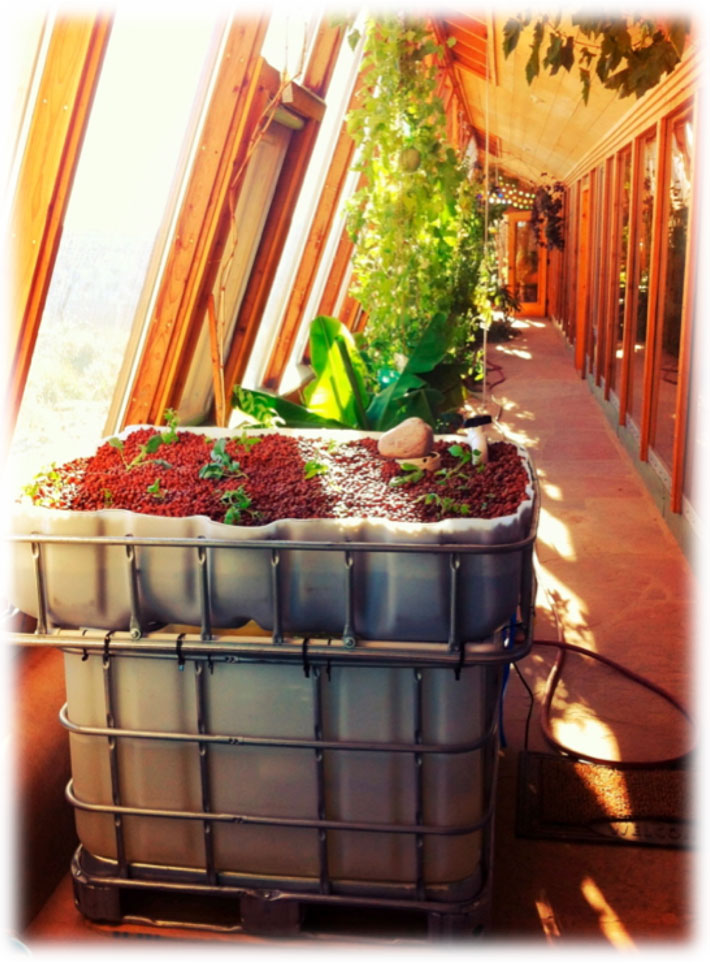 I first learned about the Earthship concept when I was in middle school. It made perfect sense to me and really appealed to my practicality. Little did I know I would be building Earthships one day… Before attending the Earthship Academy this summer I did a great deal of research on Earthships.

I read every publication I could find and watched virtually every video I could find on YouTube. Out of all the videos I watched, the 5 day food challenge where Mike Reynolds, Amzi Smith, and Brian Chev try to survive only on food produced in the Earthships caught my interest the most (watch below if you have time).

I noticed that while they were able to harvest an impressive amount of food compared to the average American household, they still struggled to get enough calories and decided to end the challenge on day 3.

I realized immediately that the food production element was lacking in Earthships. Don’t get me wrong, all the other aspects of Biotecture are totally dialed in. Earthships have a stable and comfortable indoor temperature year round, harvest enough water to sustain a family, and even have enough electricity to operate a flat screen TV with Netflix.

Food production is certainly happening in Earthships and I have personally eaten some incredible Earthship grown heirloom tomatoes… probably the best I’ve ever tasted… thanks to the growing expertise of head greenhouse manager Michelle Locher and company. However, we know that there is room for improvement.

The video inspired me, and at that moment, I decided that I needed to integrate aquaponics into Earthships to crank up the amount of food that could be produced in the buildings.

Aquaponics can help people easily produce nutrient dense vegetables and hormone free fish protein. Aquaponics uses 90 to 99% less water than traditional soil-based gardening and maximizes energy efficiency by slowing down the cycle of energy through the system. Many aquaponics systems make use of recycled materials like 55 gallon drums and IBC Totes. The system relies on maintaining balance with it’s inputs and surroundings and thus fits perfectly within the framework of Earthship Biotecture.

Last month, I made progress in my mission of helping people grow food everywhere by installing an aquaponics system in the Visitors Center at Earthship Biotecture’s Headquarters in Taos NM! In conjunction with the build, I taught a class on aquaponics for the 2012 Fall Academy session.

After the class, the Academy students helped build out the aquaponics system. I was astounded with the level of inspiration and excitement that the students showed as they assisted me in the build. I was so excited to hear the diverse questions and comments coming from the students. And of course, I had a blast and a bunch of laughs as we dealt with the challenges of organizing a build with 12 people in a narrow greenhouse using an entirely off grid power system.

For more information on this project, check out the official article, Earthship Installs First Aquaponics System at HQ, written by the fabulous Jeane Nardone of Earthship Biotecture, Taos NM.

Stay posted for two EPIC projects where I integrate Aquaponics into Earthships even further! 😉